Hannah Arendt's The Origins of Totalitarianism is a tough read. And sometimes I wish I hadn't struggled through her dense prose because much of it is making me sick with worry. I feel like an old time fortune teller because everything that I learned in the book is relevant to the Trump administration. Anyway, somewhere deep in her book she begins to talk about how Totalitarianism creeps in without the population's awareness or recognition. I strongly suggest reading this book yourself. I hope you will take time with every word. In the meantime, let me try to clarify what I think is important to understand in this moment.

Hitler warped reality for the Germans by using propaganda, symbolism, terror, concentration camps, shame and racism, along with dishonesty and violence. He pretended to care about the working man and woman, the underdog, and he aligned himself with other despots and liars. Education in all forms became not only a luxury, but it became something degrading and negative. The press and literacy became the enemy, so reality became a matter of debate, discussion, and skepticism. Warping reality serves to rip away trust and unity in society, creating a sense of confusion, supporting a rhetoric of aggression. This rhetoric of aggression serves to heighten tensions and stress (even in personal relationships), validating arguments that are essentially destructive and divisive.

While people are living in this state of confusion and distrust, violence and chaos become more acceptable and frequent. Facts slip away. Society searches for truth by indulging in petty arguments and blundering around in confusion. Meanwhile, Totalitarianism is seeping into the social cracks. She wrote many pages on this subject of reality and confusion. And here we are quite confused arguing about whether or not children are drinking from toilets while living in cages, whether or not they are going hungry, or are ripped from their parents. We are arguing about whether or not the planet will be habitable in 50 years when we can clearly see that if we do nothing the die-off will overwhelm our souls and plunge us into a psychic darkness. We are arguing about science that is settled and factual. We are arguing in the face of science and allowing our government to dismiss this science as if it were some kind of fabricated theory while the evidence exists all around us. People are so confused they are literally becoming fanatically religious because of fear and doubt; somehow the supernatural becomes more reliable than everyday reality.

Arendt would say that Trump is a symbol, a caricature of Totalitarianism; he represents the future if we don't reclaim our reality and stomp out the kind of power he will extend. He is like a nasty seed, and we don't have time for him and his hatchlings because truth is on its way, a truth that will provide a rich ground for the growth of a more frightening and destructive form of Totalitarianism than we have yet to see in any society. With climate change will come massive disasters, resulting in the loss of national worth by depleting our resources and producing roaming populations of climate refugees. This is what they are striving for...a dark and selfish future that will allow for many helpless people to die out in floods and droughts, or to starve in famines while they attempt to build and buy their way out of the consequences of inaction and greed. Help will take years to arrive, and isolated communities will die out. Death due to neglect is just another symptom of Totalitarianism.

We know what is real. All we have to do is communicate stronger, harder, clearer, and better. We are not communicating the coming catastrophe in a strong enough way. We are pretending that we will always have a voice even in the midst of a climate emergency. Even now, on the cusp of disaster, our voice is already muted and weak. 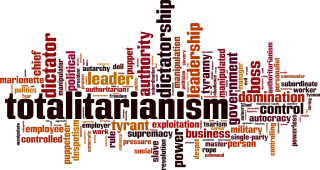