Narratives of Negativity: When they obscure the positive

It was the new millennium and my mother's fight with cancer channeled itself to its predictable, unfortunate ending. My child was not yet walking, but he sometimes pulled himself up on a plastic storage tub, yelling and screaming, beating his little fists on the lid for attention while I walked my mother back to the bathroom and then returned her to her comfortable place on the battered, sunroom couch. The routines of care-taking became meaningful, transcendental and comfortable. I had begun to imagine something spiritual beyond those precious days as they counted down to a death that would end a chapter in my hectic and frightening life. I sat in the entry hall in one of the cat-clawed wicker chairs and stared ahead thinking apprehensively about what would happen once my role as caretaker closed and the heavy front door opened into a new life without my mother.

My sister had cleaned out the safety deposit box, hoarding Mother's jewelry, and then hocking it off to some hick town jeweler so that she could pay my nephew's law school bills. Meanwhile, I was busy in my short jaunts away from the house visiting resale shops so I could buy back the family heirlooms that my drug-addicted brother had sold off to make his own ends meet. The "things" of my family's shared life meant much less than the stories that bound us together, the intriguing family legends about half-brothers in foreign countries and Dad's mysterious volunteer work with a bulldozer in some Amazonian rain forest. But some of our family stories were paired with painful realities and outrageous falsehoods, the narratives of selfishness and jealousy.

One of the most damaging falsehoods concerned my brother, a man that returned from Vietnam with classic symptoms of PTSD. Post traumatic stress syndrome passes easily from one person to the next, and I, as a preteen, found an escape from my brother's rages and paranoia by walking to the library and spending the day under its modern air conditioning and quietly structured rows of books and magazines. The busy librarians ignored me, and I had the run of the place every summer day, poking in shelves, checking out books, thumbing through difficult academic journals, and listening to audiotapes. I was a late comer to the love of reading because I had been placed in the Follow-Through Program, a federal experiment on children from poverty. Once my mother realized I wasn't in a "regular" first grade class, she had me pulled from Follow-Through, and I was an entire semester behind my classmates.

My fascination with learning screeched to a stop when it came to math, but I struggled on with reading, even getting a black eye when my mother, overwhelmed from long hours at work and mental frustration, hit me in the face with a book. That night she came home with a wind up toy, a small furry dog that chased a ball on a string, around and around. Not long after, she came home with a real dog stuffed in the cavern of her huge purse, and I was besotted with love. Several years later, a speeding car struck my little dog because it had squeezed out under the fence to join me with my friends across the street. It died on the curb, and my mother held me as I sobbed.

Much has been said about my mother, and some of it is not that positive. But the narratives of negativity have no real basis in fact, and they are constructed from malice and a desire to control the family narrative. Without my mother's multiplication tables game, I would never have passed fourth grade math. Had she not taken down all of my childish wall hangings and put metal bookshelves in my room, if she hadn't signed me up for the book club, had she not filled those spaces with books and MAD magazines, word search puzzles, and Highlight Magazine, I wouldn't have a college degree of any kind. I remember complaining to my brother about one of my teachers, and his response was not what I expected. He typically took my side on things, and he tended to love me through his haze of anger and addiction. When he told me that my problem with my teacher was a problem with myself, I was shocked. He was right. It didn't really matter whether I "liked" my teacher or not--it only mattered that I learn everything I could from my teacher. His tough stance with me enabled me to open my mind to the ideas of other people.

They both passed away within months of each other, but they left me with enough wisdom to move on and live a fascinating and fun-filled life. I feel sorry for the people that avoided my mother and my brother because of the negative narratives they had been subjected to. I also pity the source of these narratives because they are an example of how hate and narrow-mindedness constructs an alternate reality that is untrue and negative. 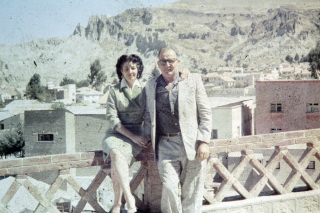