Donald Trump: Hateful and Bloody, a Danger to Everyone

While we all sit here in shock that our government reached out with a drone and assassinated a top general of a sovereign nation, I wonder why the surprise. Obviously, these swings in policy, these outrageous and perilous acts, simply mean that our government has been hijacked by an authoritarian that has no intention of using regular channels to debate policy. Trump doesn't care at all about the 3500 souls he just issued into certain conflict. Instead of removing our soldiers from the Middle East, he has now insured us of years of entanglements, revenge, and war. He did this dramatic act in order to sway attention from his impending removal from office.

The Iranian government complied in full to the agreement of 2015, so why did Trump feel it necessary to reestablish sanctions, withdraw from the promise, and plunge our young people into another useless, hate-filled war? He did it because of his destructive nature, the same nature that so many ignorant and hateful people find attractive. In restaurants, bars, and other gathering places, people talk about how he at least "does something." Yes, he certainly has done a lot to bring about an age of darkness unlike anything else we have ever seen. Everything, from his policy of environmental deregulation, to his war-mongering, connects to death, disease, and disaster. Trump alone, even without his neoliberal disgusting family in tow, characterizes the negative downside of unfettered capitalism, a troll that physically resembles the very thing he symbolizes, greed, gluttony, and grief.

For quite some time I have been sitting around just trying to make a difference with the few people I know on social media that are under the star struck spell of hateful Trump and his ignorant GOP followers. But now it has become even clearer to me that as a country we can definitely not risk another four years of this pain. He has to go no matter what it takes. No matter who ends up as his democratic opponent, they must get your vote. If you care anything about the lives of our soldiers and the future of our country, you must vote against Trump.

In the meantime, while we still can focus, we should turn out attention back to removing him from office. Obviously, he did this as a detraction because he knows he risks going to jail after serving this term. His only recourse, in his mind, is to get reelected at any cost. He doesn't care who dies or suffers. 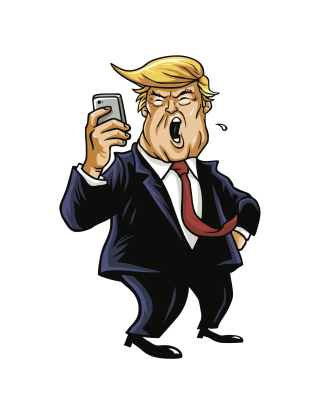