Why the Bloomberg Message Matters so Much! Listen America...

Writing in juxtapositions hyphenates how circular and connected everything in the world is. When I interact with my dogs, I parallel their train of thought with my own because I respect the brain, the little soul, that exists in this furry, needy, little body. As Lukács relates his theory of social realism to Marx, he "contends [that human beings] are essentially socio-historical beings" and that the "formation of human society across time is a process of economic transformation, in which deep economic tensions resolves themselves in higher forms of social organization" (Graham 198). Even though Georg Lukács theory of the novel is simply that, a theory about novels, the economic juxtaposition is impossible to ignore. How does this all relate to what is happening in American politics now? Trump, an obvious fascist, represents an opposition to what most Americans fear the most, a debasement of the social structure as it swings left to shelter and support vulnerable individuals coded out of the mainstream economic upturn.

How much of this upturn is due to an increased expansion of the fossil fuel industry is unknown by me, but I would say that it goes far enough to spike fear in the worker, enough fear to maximize a winner-take-all mindset such as the one that Trump represents. Critical realism debunks any possibility of a happy ending in the great American story because these higher forms of social organization, the economics of the neoliberal/capitalist state, will forbid any transfer of wealth into more sustainable energy forms. While Americans do see a few more solar panels and electric cars around, nothing is happening to offset carbon and methane output, quite the opposite, so a dirtier and more perilous world awaits for our children and grandchildren, even as we now watch helplessly as a worldwide pandemic unfolds. Politics at large, especially left leaning lip service, fails to permeate the echo chamber of winner-take-all-fascist-mindset even on the eve of our destruction.

The politicians on last night's debate stage fail to grasp Lukács theory of society functioning as an economic process constantly in transformation, so in other words, they will fail to beat Trump's fascist ideology because they are unable to adequately assuage the fears of the common worker, the fear of sustainable energy overtaking the fossil fuel industry. Even so, another, more dark and shady goblin lurks behind the transference of power from fossil fuel to sustainable energy, artificial intelligence. Fossil fuel workers realize at some level the sloughing off of jobs to machinery and robots. Even as we transfer wealth from one sector to another, skill based jobs are declining, no matter the purpose or intent. Following a cruel fascist into a dirtier future will only make this economic transformation more difficult and result in more penury and suffering.

This is why I think it's vitally important to the public that Mike Bloomberg use his platform if not to win, then at least to inform. Stopping Trump means that Americans will face a brighter future even in the face of this economic transformation. Maybe we are trading one neoliberal narcissist for another, but at least Bloomberg is authentic, a strong juxtaposition to Trump. 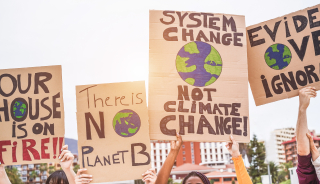 Posted at 09:05 AM in Current Affairs, government and politics, politics, Science | Permalink | Comments (0)