The Red HOT Pen
Home Archives Profile Subscribe
When White Privilege Meets the Dog Walk: Can the Neighborhood Karen be Dangerous?
Professional Development: How Bard's Institute for Writing and Thinking is Helping Me on Day One

Explaining Myself: Why I Want to Become an Anti-Racist Teacher

First of all I would like to remind my readers that in spite of a stereotypical African American first name, I am a white person of western European descent with only a smattering of Native American thrown in. I know this for a fact because I took the 23&Me DNA test, and it turns out I'm nearly as white as a person can get. I do have skin that darkens up nicely in the sun, dark green eyes (cousin to brown on the DNA strand), and an overall 'Indian' look, but only one of my ancestors can be verified as native.

Discrimination and prejudice certainly impacted my life in an ongoing and rather problematic way because my family members stepped out in nontraditional roles and some of them worked in what could be considered as odd career choices, including myself. I'm not a stranger to white elitism and snobbery. But my challenges stack up nicely in the columns of inconvenience or mild heartbreak, even though I now realize that some of my old associates either hid their distorted and ignorant opinions from me, or have, over the decades, became disgustingly narrow minded and ridiculous, even ungrateful.

In recent years, some of my African American friends and coworkers quietly and patiently pointed out some of my own dumb blind spots and unearned privileges. Even if I earned the right to some of my privileges through hard work or suffering, I still enjoy a ton of White-Bread-American advantages that people of color righteously feel angry about. The best place to view this list of unearned advantages built into the racist American system are listed in Peggy McIntosh's essay White Privilege: Unpacking the Invisible Knapsack.

McIntosh, associate director of the Wellesley College Center for Research on Women, lists 50 ways that white people experience privilege over people of color. All 50 of them are relevant and important, eye-opening and true, but for now I want to talk about number 39: I can be late to a meeting without having the lateness reflect on my race.

The best school leader I have ever known was a younger and wiser African American woman. She is honestly gifted, an amazing writer and communicator, a wonderful teacher and friend to every person that knows her. She goes out of her way to think open-mindedly about people that I typically write off as plain stupid and fake (this is hyperbole because I seldom write anyone off). Obviously, her heart is ten times bigger than mine because she strives to see the good in everyone, no matter their background or identity, while I'm a skeptic when it comes to adults. But she sometimes, like a million other qualified and gifted people, would be late to a faculty meeting or other function. On one notable time, she was stuck in a meeting with a parent, and I watched and listened as she entered the room; I witnessed the negative body language and eye-rolling, and I heard the comments that were made:

"There she is, late as usual. I wonder if she knew we had a meeting. She's late all the time."

It's true that occasional lateness happened, but if the occasional lateness happened to me, or some other white person, nobody ever cares or makes any audible comments. When it's a white person, people tend to mind their own business when it comes to lateness. When it's a person of color, it's because the person is not organized, or they are lazy. This is just plain wrong.

Number 13 has to do with money: Whether I use checks, credit cards or cash, I can count on my skin color not to work against the appearance of financial reliability. Let us be honest white people--most of us don't deserve the bank credit that we get. Some of us start businesses and fail to properly pay or compensate our employees. Some of us are not worth the paper we are printed on, and that includes me. I am just not worth much, and I may never be worth much. But I have something that most people of color don't; I have some generational wealth. It's not much, but it's still amazing. It's better than nothing. When I walk into a bank, I get a ton of respect, respect I definitely do not deserve. If my qualified and gifted person of color walks into a bank, she receives less attention and gratuity, even though she is trying much harder than I am to establish herself as a reliable and current bank customer.

We all know these stereotypes and racist beliefs are built into everything American. The Governor of Texas, Greg Abbott, wants to make it illegal for teachers to point these facts out to students. He wants to forbid teachers to speak freely about critical race theory; but I'm positive that Abbott doesn't know what CRT is, or he would want to have it taught in our schools, because, after all, isn't Greg Abbott an open-minded and well-educated man? Critical race theory basically teaches us to notice the built in racist structures that exist, and then it teaches us how to reject and resist these ignorant ideas personally. For example, CRT points out that many deed restrictions disqualify residents based on their race. This is a fact of life, not a fairy tale or fake news. If it is our goal as a society to make opportunities and the American dream available to everyone, then how do these deed restrictions concerning race further equity? And, of course, this example of deed restrictions is just a tiny, petty example. If you really want to examine CRT, then look at incarceration rates, the war on drugs, immigration, and healthcare disparities, to name just a few glaring, national problems.

The real threat to American life is right wing extremism--neoliberalism. Donald Trump, Greg Abbot, and a slew of other ignorant politicians and demagogues clearly aim to normalize white supremacy, and they personally enjoy indulging in hateful and divisive acts and speech. They want wealth for a few and subservience for everyone else. Wealth for a few and subservience for everyone else is the political and economic theory known as neoliberalism. If you are following this ideology, if you are falling for this scam, then you are part of the problem. You are voting against yourself. If you are indulging in hateful thoughts and ideas, then you are doing something that is causing you to feel a temporary relief from what is buried under your psyche: the knowledge that you are wrong. You are actually causing Americans, including yourself, to lose freedoms. Neoliberalism and white supremacy are dangerous ideologies, but Critical Race Theory is an idea that will help you understand our national history; CRT will help you know yourself better, especially if you are white. 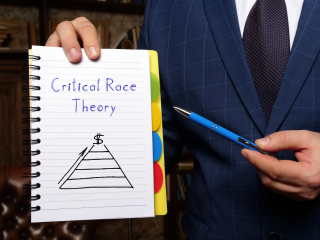 Posted at 11:27 AM in Current Affairs, education, government and politics, politics | Permalink | Comments (0)