The Red HOT Pen
Home Archives Profile Subscribe
Russia and Putin: Give Ukraine the Planes 🌻
A Bee Story (Not My Own) 🐝 Random Musings (Not Mine Either, But I Do Agree) 🌤

Russia, a petulant, whining child, complains about the consequences of something that is entirely its own fault, the bloody invasion of Ukraine, an invasion based on obvious lies and foolishness. The rest of the world, according to the Kremlin, must capitulate and give them Ukraine. Why? Well, because it once belonged to them, back in the good old days of Soviet oppression. Don't forget, if you are leaning towards fascism, or if you are someone thinking that kowtowing to the Kremlin will protect you from harm, that Soviet citizens couldn't make choices or engage with the outside world. They lived by a rigid standard of rules that were designed to trap people into a life of subjugation and slavery. Even now the Russian government stealthily enslaves people that it considers unworthy of partaking in the common "civil" society, so what you are worth?

How would you stack up on Putin's rubric?

Frankly I'm sick of their tired and meaningless diatribes, especially that rat Minister of Foreign Affairs, their murderous and ugly intentions, and their selfish imposition on the world order. Just like any other adolescent cry baby, this regime will never be satisfied until they completely dominate the entire free world power structure. Every day they threaten a new border, a new ethnic group, or offer to pony up a nuke or chemical weapon. The world does not have to sit around and look at this.

We can take action too.

As if Putin and his cabal of greedy, rich and ugly, disgusting followers and oligarch zombies didn't already have enough wealth and land, exclusive power over vast populations, and at least prior to this cruel and murderous invasion, substantial prestige and unlimited luxury. How much do they need? Why couldn't they turn their ugly impulses into something beautiful and become kind neighbors to the countries around them? Think of how duplicitous and influential a different kind of Putin could have been. Even if he is just a hardcore Soviet, imperialistic nut-show, he could have seemed so different and thus benefit exponentially for his country, his cabal, and his personal greed.

Putin and his oligarchs blindly threw away the greatest opportunity in the history of humanity. They took an opportunity of positivity and turned it into the ugliest mess since WW II. No doubt the hand he played in Syria defined him and allowed for future atrocity, but still a shroud of decency, even farfetched, might have been cast over his crimes considering the massive disinformation campaign that precludes such barbarism. His holding of a lighted candle during an Orthodox Easter service seems to parallel with Trump holding a Bible while protesters are gassed and beaten because in every move that Putin makes, rather it be abstract or concrete, a threatening message is sent. Every move Trump makes, even though they are completely amateur in comparison, share the same hateful and indulgent set of goals. Putin is telling us that he will use gas on Ukraine.

The fascists are here even if they are unable to define themselves due to cowardice or a lack of education. They are here and we must acknowledge their presence, just as if they too are whining petulant children. In our country, people are free to think as a fascist, but they are not free to act as a fascist. But I want to make it clear to the people that bother to read my thoughts, the toxic pond we wade in is deep because of Putin and his outdated Soviet philosophy--the modern fascist world will make the old fascist world look like a peaceful playground full of happy children. We must rise up and defend freedom or the suffering and horror will never end. Fascism, in alignment with Putin's world view, will be nothing but atrocity after atrocity.

Ask a Ukrainian if you don't believe me. 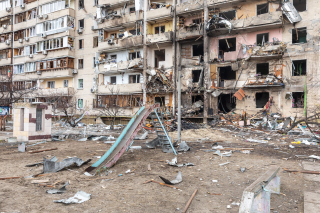